Specifically, the “Tax Cuts and Jobs Act of 2017” is the first major rewrite of the United States tax scheme since Congress passed the Tax Reform Act (TRA) of 1986.  That’s over thirty years since the federal income tax system has seen a monumental overhaul.  Obviously, a lot can happen in 30 years, but after successfully reconciling many different bills, modifications were approved by Congress for taxable years 2018 through 2025.  Now that tax reform is approved, what does it mean to you? 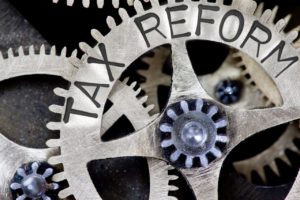 For starters, the standard deduction becomes a “new” standard.  Although itemized deductions are beneficial, these deductions have had many “floors and ceilings” along the way.  Floors set the minimum amount for when you can start deducting and ceilings put a cap on how much you can actually deduct, which often leaves little wiggle room or tax benefit for those that chose to itemize.  To make up for eliminating or phasing out itemized deductions, the updated act doubles the standard deduction to $12,000 dollars for single filers and to $24,000 dollars for married.  With these new thresholds in place for 2018 and beyond, many taxpayers will discover they no longer need to bother with itemized deductions at all to see a benefit on their annual tax return.

The standard for the child tax credit is also getting a refresh.  If you have children or are a legal guardian, the child tax credit may be claimed for qualified children under 17 years of age.  As a clarifying statement, the child must be under 17 years old at the END of the tax year to claim the credit.  For 2018, the Child Tax Credit is doubled from $1,000 to $2,000 per qualifying child.  If you have one child, you will be able to claim a refundable $2,000 credit; 2 children a $4,000 dollar credit and so on, even if you have no tax liability.  The child tax credit is a refundable vs nonrefundable tax credit and can be used to reduce or pay a tax payer back.  As an example, if the calculated tax owed for the year is $1,500 dollars and the new standard credit is $2,000 dollars, you can reduce your tax bill to zero and get back the extra $500 dollars!

What about those brackets?  Not basketball brackets, but tax brackets have also been impacted by the updated act.  The new tax ruling may reduce and simplify individual income tax rates and applies to income earned starting this year.  While there are still seven federal income tax brackets, both single and married filers may see slightly lower rates and adjusted income ranges.  For a breakdown of how the tax plan will change federal income brackets for 2018 compared with those in 2017, see the below charts: 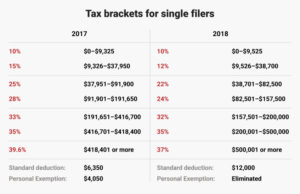 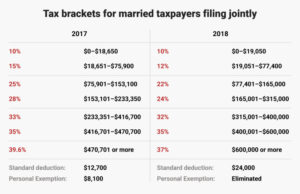 With approximately 70% of Americans claiming the standard deduction when filing their taxes, paychecks will almost certainly see an increase in take-home pay as employers adjust withholding to the new standards.

For companies and small business owners, you’ll stand to benefit from a significant decline in the corporate tax rate too.  The corporate tax rate until the recent change was on average 35%, but it is dropping to a flat 21% under the new act.  Although there is no “one size fits all” answer to the millions of possible “what ifs?” under the new ‘Tax Cuts and Jobs Act”, consulting your tax professional is the next best thing to planning for economic growth and more income!

Randolph Business Resources, LLC.
Our experienced staff are ready to lend a hand to you and your business.
Visit us @ www.randolphacctg.com
Call us at: (615) 202-5829 if you need immediate assistance